It has been an interesting season so far is probably the understatement of the century. Over half of the Midwest Paddle League’s planned 16-race schedule has been cancelled. However, where there is a will, there is a way, and 7 races have found a way. Social distancing, masks, limiting shared resources, eliminating registration lines, and capping entries have all helped keep us safe. However, probably the most important safeguard has been the love and respect paddlers have for each other.

Saturday, August 15th brought us Beach2Beach, the 4th live race of the season, and an interesting trend is developing:

Interest in paddling remains strong, and entries are trending upward despite limits on gatherings and risk aversion. And even more remarkable, Beach2Beach is a first-time event, new to the Midwest schedule. Race organizer Kathy McRae:

The inaugural Beach2Beach Paddle race at the Northshore Yacht Club in Highland Park, Il. Had an incredible turnout. CDC and State COVID guidelines were not only followed but welcomed by the 58 racers and additional volunteers, friends and family who easily distanced themselves out on the water and the beach

The 6, 3, and 1-mile races were all fiercely competitive yet bound by friendship and community on and off the water. I couldn’t help but notice the pure happiness which washed up on the beach as each paddler crossed the finish line. The joy was contagious as Racers celebrated their successes all afternoon with old friends and new. 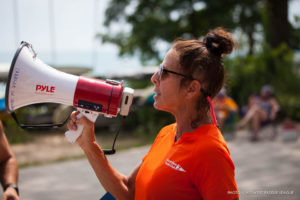 Full set of race results can be found here.

Race coordinators Kathy McRae and Laura Knapp chose to highlight the beaches in the area by making all racers head to destination beaches to pick up marks before heading back to the finish line. Highland Park hosts 7 miles of beachfront on Lake Michigan, although much of that is privately owned. The marks created an island vibe by being colorful Hawaiian leis that the racers could wear along the route and after the race for the post-race. Two main race routes made up the challenge, a short race – 3.2-miles out-and-back, and then a long race – a 6.4-mile race that was a figure eight course. The long course started at the Park Avenue Beach, headed south on the short race route to a buoy positioned at Rosewood Beach and then back to the North Shore Yacht Club, then continued north on another out-and-back to the Open Lands Lakeshore Preserve Beach historically known as the 1880s Fort Sheridan Army Base, then east to a buoy turn and back south to Park Avenue Beach.
Conditions on race day were about the best you could ask for, given it was Lake Michigan and conditions here can be a little rough – or change on a dime. It was partly cloudy with temps climbing into the 80s, winds out of the north adding to a noticeable swell coming in to shore.

It was a great day for new racers with the North Shore Yacht Club putting forth a small handful of seasoned racers and approximately 12 racers were new to racing having only just begun paddling at the beginning of June. The 1- and 3-mile races provided easy short races for new paddlers to try out their sprint skills.

The 3-mile race was very well attended with 25 entries, and more remarkable 14 of the entrants were in surf-style classes. 18 of the entrants in in the 3-mile were women. The women came out in force and showed us all what paddle events could and should be from a diversity standpoint.

The most hotly contested class of the day was Women’s surf-style. Tracy Jacobson was able to pull out over a 2-minute margin over 2nd Place Julie Graham. Kathryn Burson challenged Julie for the second podium spot, but fell short, finishing less than 30 seconds behind and securing the final podium spot. Robert Gustafson was the sole male competitor in the surf-style class. 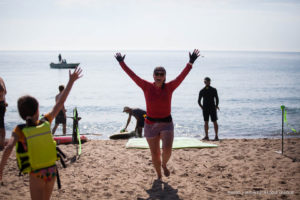 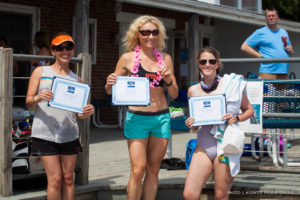 In the competitive 14’ 3-mile class, the women outnumbered the boys 3-2. Local Cheryl Perlis came out on top over Valentyna Artamonova and Meital Hochenboym. Adrian Barnett and Ofer Meged when at it in the Men’s division and finished 1-2. Adrian Barnett commented after the race:

Lake Michigan proved to be a challenge once again. But, a fun challenge. I spent most of my time on the way out and back just trying to stay upright, but couldn’t resist surfing a few of the swells (doing more of that on the way back). After we finished Ben Wernick suggested I would have been faster had I kept a straight line, and I think he was right. He was on my tail at the buoy turn AND the finish line. But surfing those waves was an opportunity I don’t get down here in Tennessee, so I had to take it! All in all it was another beautiful day on a gorgeous lake surrounded by the great group of people involved with the Midwest Paddle League. Well worth the long drive.

The 6-mile class was equally as competitive with a fair amount of entries in the Kayak and OC-1 classes. In fact, the fastest time of the day was in the 58-minute range set by Matt Meersman in an OC-1.  Brian Jefferies and Channel Esposito pushed each other for the 2nd and third spot on the OC-1 podium. Michael Meridith chased Matt Meersman in his surfski, but could catch him, finishing less than 60 seconds behind.

Robert Buziman barely edged out Michael Olsen in the kayak class. Mathew Ameel rounded out the podium. Jennifer Gordon carried the flag for the women kayakers.

The women’s 14’ class was once-again dominated by last season’s class-champ Kirsten Marina Lefeldt. Race-organizer Kathy McRae but in a great effort for 2nd, and series regular, and super-nice lady Leslie “I live in Michigan now” Maclin, took the third spot on the podium. Laura Knapp raced a 12’6” board and was the sole finisher. Kirsten went on to comment:

Beach 2 Beach Race at North Shore Yacht Club! What a great venue, perfect conditions, and an amazingly well-organized event. Icing on the cake for me was watching four of the ladies I have recently coached, compete for the very first time and loving it. Welcome to the Midwest SUP community Erin, Amber, Denise, and Susan!

My own training hasn’t been very focused lately, but it was worth shifting focus onto coaching and giving back. I still won the women’s 6-Mile although I felt I was paddling at 80% of what I’m capable of. Next up: Gun Lake Season Finale. 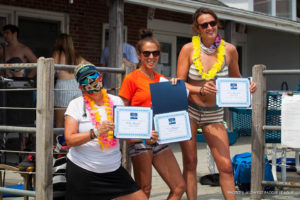 In the Men’s 14” division newcomer Javier Diaz followed up his strong 2nd place at Oconomowoc with a dominant win over Karl Eugster. The race of the day was for the third podium spot. Series regular Bryan Block always finishes strong, but snapped his paddle at the start, opening the door for local Joe Betchtold and Doug Vojko to snag the final podium spot. In a display of sheer athleticism Bryan sprinted to his car, grabbed a spare paddle, and chased down Joe. In the end, Joe was able to hold-on to the podium spot by a margin of about a minute. Bryan commented:

I was disappointed when my paddle snapped on the opening sprint. I was well prepared for today’s race & looking for redemption. So, I paddled back to shore with my broken paddle half. Ran across the parking lot to get another paddle.  By the time I returned to the start line, 12 minutes lapsed.  Six miles later, I just missed the podium. The reaction I received at the finish; I’ll never forget.  People were amazed, they couldn’t believe it.

Kathy McRae closed out the event by presenting awards and congratulated all racers at the awards ceremony. She praised the paddlers who made this their first ever race.  “This event is a great way to grow the sport of SUP, Kayak, and paddle racing!” All participants received a commemorative Beach 2 Beach bag and mug as well as a post lunch and treats.  The Twisted Turtle Band entertained the socially distanced crowd and performed two upbeat sets.  No race can go on without positive and determined volunteers who provided First Aid, Safety Boats on the water, timing, and lunch prep.  McRae stated:

Safety was our number one consideration when planning the race.  Secondly, we tried to create a joyful community event for racers during this time of cancelled and virtual races.  We definitely learned a few things during this inaugural race, and it was so successful we will be back at it in 2021.

The North Shore Yacht club has been in Highland Park since 1933 and is a no staff, family boating organization that offers safety and skills classes in sailing, kayaking, and paddleboarding, . They also offer equipment use to local families who have taken the appropriate safety and skills classes.  The club name is a misnomer because the only sailing boats are 15-foot Buccaneers, and 8-foot Sunfish with a few Barnett’s thrown in. Kayak and paddleboarding instruction started at the club in the early 2000s and has been growing in popularity since. The club owns 2- buccaneers, 4-420’s, 3-Barnetts, 14 kayaks, 13 paddleboards, and 4 powerboats.  The powerboats are essential safety boats that are used during sailing regattas and club events.

Midwest Paddle league is back in action on August 23rd, in the Indianapolis area for Sky and Oar for Guardian Angels.

Thanks to Doug Vojtko and Laura Knapp for contributing to this story. 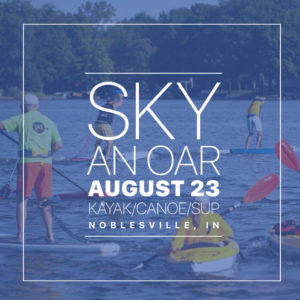 About the Midwest Paddle League

Welcome to the Midwest Paddle League – designated for paddlers, by paddlers. If you’ve never raced before, or you race most weekends, with kids races, short races, long races, sprints and more… there is an event for YOU! Come for the challenge, stay for the camaraderie. Here in the Midwest, it’s COMMUNITY FIRST. COMPETITION SECOND.