Getting Back in the Water

I am a rule follower…as a rule.

Maybe it’s because as a child I was afraid of getting in trouble.  Maybe it comes from being a public servant for years. Both? Anyway, I have been observing our state’s stay at home order very rigorously. And as such, I’ve not paddled since the Paddle Monster Spring Training Camp, which ended March 9th. In lieu of paddling, I’ve been rowing on the rowing machine, land paddling in my neighborhood and taking on-line yoga classes.  The later two have been great, actually.

But, that’s not something I care to do for the long term, especially the rowing machine. As I felt my mind and my soul starting to spiral down into the depths of the Great Rabbit Hole of Despair, I realized something. There is a balance between doing what I can to keep myself and others virus free and keeping my mental health…well…healthy. Depression, even the situational kind, can lead to unhealthy things like stress eating and lack of desire to exercise which leads to weight gain and high blood pressure, which as we know are not good things to have if you want to beat Covid-19. Lack of exercise, stress and depression, even the situational kind, also has an impact on the immune system.

Or maybe the impetus was having a new paddle craft.

With great consideration, I hatched a plan to paddle safely. Something I know others have been doing the entire time we have been “locked down” but I have been reticent to do.

This morning, I paddled.

This morning, for 80 glorious minutes, I had the lake all to myself, save the herons, osprey and bald eagles.

And for 80 glorious minutes, the world felt normal.

The state parks – including the state-managed lake recreation areas where I normally paddle – are indeed closed. But, our state Wildlife Resources Commission Boat ramps are not. So, I did not break any rules by putting my new Kai Wa’a Ares outrigger in.  The lake is only about 30 minutes from home, so that’s a reasonable drive.  More than that would be “unnecessary travel” and beyond the spirit of the state’s stay at home order.

I’ve heard from friends how crowded the launch areas have been as the weather turns beautiful, as people look for ways to combat boredom and as quarantine fatigue sets in. Weekends especially, but even during weekdays, later in the day and before sunset.

I decided to go to the ramp that has a separate launching area for paddle craft and I went at dawn, when I knew there would be fewer people out.  Get my workout in and get off the water by 8:00 am. Keep wipes, soap and water in the car.  Keep a mask in my pocket just in case people were around.

When I got up this morning, it was raining and it was markedly colder than it has been recently. Didn’t care.  I know how to love the conditions.

I haven’t seen a body of water for 57 days. What’s a little rain? Plus that will keep people away.

When I got my first glimpse of Lake Jordan, I cried. 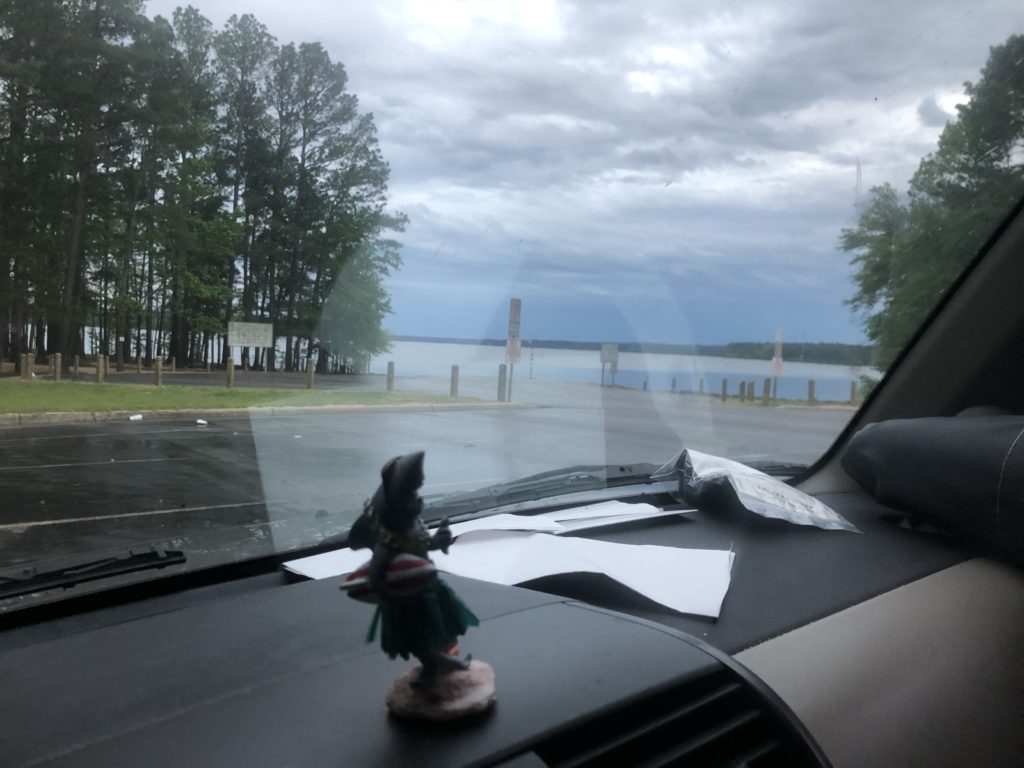 I cried again when I took about five paddle strokes and looked up to find a bald eagle in the highest tree on the shoreline, watching over me.

Herons, cormorants, and an osprey couple in a nest watching over their new family. I’ve missed them all so much.

Just feeling the connection with the water was amazing. Feeling the way the new canoe moves was amazing. There was a bit of wind so there were micro-micro bumplets and the Ares found them without me having to make any effort.

I paddled back to the launch, not wanting to leave. I’d managed an easy, get-to-know-the new-canoe five miles. I did drills but did not do huli practice.

It was more than enough. For now. 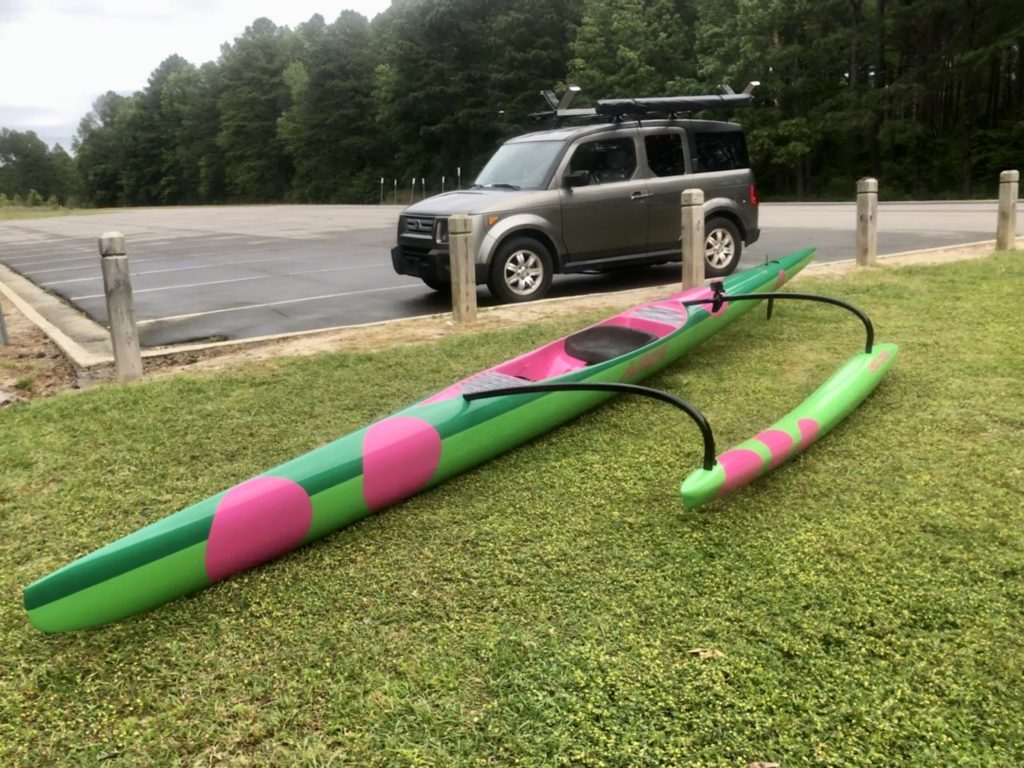 As I finished loading up, a steady stream of cars started to pull into the parking lot. Some people just sat in their vehicles.  Others started unloading boats. It was just after 8:00 am. I felt that uneasiness start to come over me – the uneasiness that comes from knowing things are not “normal.” The same uneasiness that I feel when I am walking my dog Cooper and we see people coming towards us on the sidewalk. The same uneasiness I feel when I realize I need to take extra steps and think about “Corona Logistics” when I do need to go somewhere.

Things may never be the way they were.

The “new normal” may morph several times before we are over this. But I think about the message that the bald eagle brings, in terms of its meaning to Native Americans…here’s one interpretation:

”When an eagle appears, you are on notice to be courageous and stretch your limits. Do not accept the status quo, but rather reach higher and become more than you believe you are capable of. Look at things from a new, higher perspective. Be patient with the present; know that the future holds possibilities that you may not yet be able to see. You are about to take flight.”

Lisa
Lisa is managing editor of PaddleMonster.com and is an avid paddler of all the things - including sup, SurfSki, outrigger canoe and prone, though she especially enjoys paddle surfing and downwinding. She is a former journalist with more than 30 years experience in print and broadcast journalism and in government communications. She is a six-time Chattajack finisher, racing both sup and OC2. When not paddling, she is an outdoor instructor.