My favorite thing in our paddle world is surfing. Period. Surfing in the outrigger, in the ski, in the open ocean dowinwinding, or on a board in the lineup. And as much as I love downwinding, conditions are rarely what I would call optimal for that where I live.  Covid has kept me from traveling to the best places for that this year.

It has also hampered my ability to make the four-hour round trip to my local surf break.  Whether because of no-travel lockdowns, subsequent crowds, the new work scenario where I am actually working more hours but from home, and then just the shear malaise produced by everything that is going on around us.  Not sleeping well.  Everything feeling like it is such an effort.

All that combined with the fact that the good waves and my schedule never seemed to sync.

I missed two really good opportunities because I let that malaise overcome me.

That had to stop.

And yesterday, I put an end to it.

Guess what? It felt almost normal.

Up until yesterday, I’d only been in the ocean once since this mess started.  And while that was good, and satisfying, it was not what paddling with my mates used to be.  No hugs, staying distant, and no socializing afterward.  No afterglow on the way home. Sure, it felt good and it made me happy, but something was missing.

Determined and well rested, I left the house yesterday morning at about 5:30. There was a surprising amount of traffic on Raleigh’s beltline and I-40 until I got on the other side of I-95.  As the sun started to come up over the fields and forests of Eastern North Carolina, my heart nearly burst. If you’ve never driven through this part of the Tar Heel State at that hour, heading east, well, you’re missing a treat. (If you want to know what it’s like, just put on Mary Chapin Carpenter’s song “I am a Town” and you’ll get a feel for what I am talking about.)

I turned off NPR and tuned into a new playlist from Spotify that I’d been meaning to listen to – “Surf Mesa Radio.”  It was perfect chill out music and it just added to the ambiance.

Heading into to Wilmington and crossing over the causeway to the barrier island of Wrightsville Beach, the marshy, salty air filled my inland lungs and was as satisfying as that first taste of coffee in the morning, or a gulp of cold water after a hard workout.  I noticed that the marsh grass was starting to turn into its fall color. So beautiful.

The lot at Access 2 was nearly full when I arrived, and all the cars had roof racks and board carriers atop them.  Always a good sign.  I didn’t even bother to do a surf check – I changed into my rash guard and unloaded my gear and hit the beach.

Perfect waves for someone who hasn’t surfed in six months.

I heard other paddle surfers hooting and hollering.  I waved to a friend who was on her way off the beach.

“There are some fun ones out there!” she said.

I had the larger board with me – the 9’8” SIC Fish.  I figured it would be better since my skilled were rusty.  I paddled out standing up immediately and soon I was up and over the incoming waves and on the outside.  The water is still warm and little silver diamonds shimmered as the sun continued its upward trajectory.  A few mullet jumped passed me.  Fishing boats were coming in close in pursuit of what ever was pursuing the mullet.

The water was a beautiful emerald.

The tide was coming back in and the waves were getting mushier by the minute but it did not matter.

After six months of no surfing, catching your first wave, no matter how small, nor no matter how long the ride, is the best feeling in the entire world.

To paraphrase Gerry Lopez in the movie “Step into Liquid”, once you have one wave, it makes you want to come back for another, and another.

Sure, I was rusty, but it might have been the best session I have ever had.

Okay, let’s be honest – every session is the best session you’ve every had.  There is nothing, nothing like the feeling of dropping in and turning down the face of the wave and then kicking out.

After my first wave, and after kicking out, I was so elated I fell off my board as if I was taking the “Nestea Plunge” out of sheer joy.

When I paddled back out, the tears came.

It is true what the author Isak Dinesen said. “The cure for anything is salt water – tears, sweat or the sea.”

I always try to catch at least ten waves before ending a session, but the tide was not on my side, and I only managed nine.  But that was more than enough to rejuvenate my soul.

Big grin on my face as I walked back across the sand to wash off my gear and load it back onto my Adventure Toaster – my nickname for my Honda Element.  I intentionally passed on hosing myself off.  I wanted to feel the salt water from the waves on my skin and in my abnormally long hair ( thanks, Covid) for as long as possible. 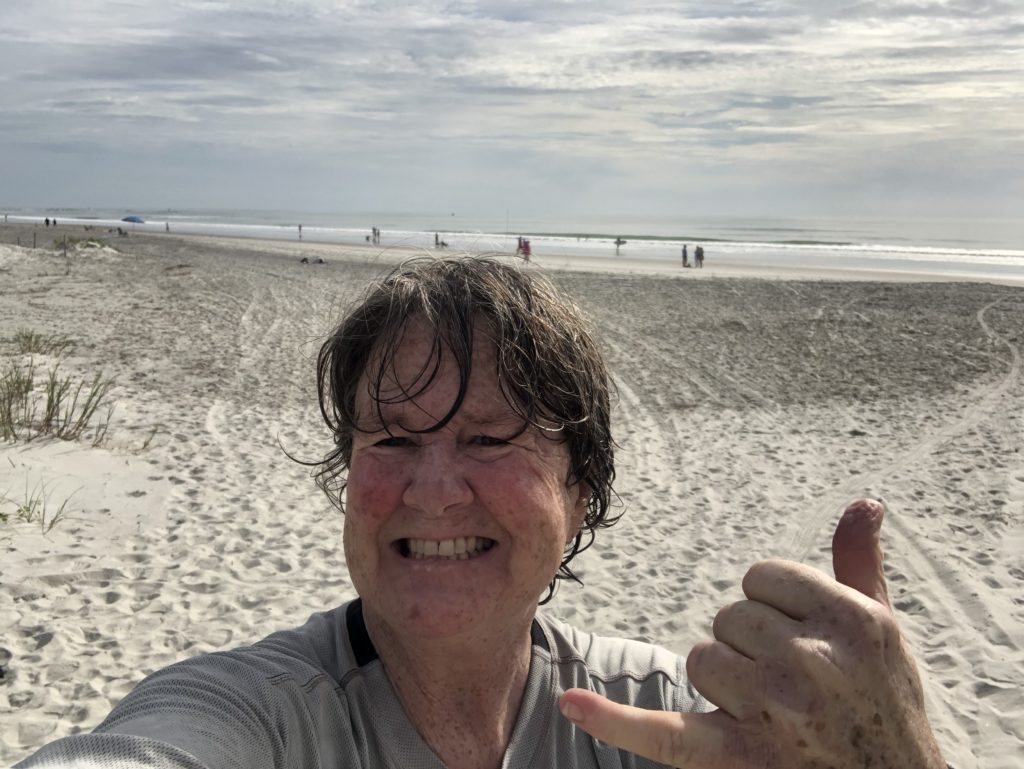 After I changed, I placed an online order for a great sandwich and a coffee from my favorite post surf place to nosh, Spoonfed Kitchen.  I picked it up for the ride home,  and that was another first – the first time I’ve been in a restaurant since March.

I got back on the interstate and headed home, enjoying the good food, loving the good java.  And for the first time in six months, it felt normal.  It felt right.  I continued listening to Surf Mesa radio and replaying all the nine waves back in my head, along with the “big” wipe out on what would have been my wave of the day.  I felt pleasantly tired and more than relaxed.

I cannot wait for the next session.  And I promise it won’t take six months for that to happen.

Lisa
Lisa is managing editor of PaddleMonster.com and is an avid paddler of all the things - including sup, SurfSki, outrigger canoe and prone, though she especially enjoys paddle surfing and downwinding. She is a former journalist with more than 30 years experience in print and broadcast journalism and in government communications. She is a six-time Chattajack finisher, racing both sup and OC2. When not paddling, she is an outdoor instructor.